Back in the day, one could buy a new game, at the launching price (what ever the price it was that said game launched with back then) and that was it, no fuss, no worrying about anything to purchase for that particular game in the future. Until that is in the early 2000s (or maybe even before, I might be mistaken here) when game expansions starting coming out, those were essentially continuations to the original games, of course back then (I sure do like to believe so) game companies didn’t have in mind to extort more money out of their customers when they first launched their games, that realization came when they started realizing that they could actually release more parts to the game and sell them!

Fast forward a few years and you start getting into the “Next gen” era, or more descriptively, the PlayStation 3 and Xbox 360 (Since they could be considered last gen now, right? No? Yeah, I don’t want to be saying it either). With the rise of their respective online stores came the rise in Downloadable Content, which essentially was watered down expansion packs, instead of a game giving out one expansion pack and calling it quits, like for example, Red Alert 2 with Yuri’s Revenge, Warcraft 3 with The Frozen Throne, or Diablo II with Lord Of Destruction, these “DLCs” came as continued support of the company to the games they let out, most notable of which being Call of Duty with their map packs which raises another issue, more often than not, DLCs are multiplayer centric and not single player centric, especially when it comes to shooters, the company knows its target demographic won’t be paying attention to the single player mode as much as they will to the multiplayer mode (At least that is how I felt about Battlefield 3) so they start to concentrate on the multiplayer ignoring (sometimes, not always) the subpar job they did on the singleplayer campaign.

A little more down the line and you get Free to Play games, ah, the things that started it all as far as microtransactions are concerned, “want more XP in that MMORPG you’ve been sinking so many hours in? Sure, buddy! Go get that nice credit card of yours, pay us, and we’ll give you what you want!” But that was “almost” justifiable due to server costs and whatnot. However, recently, with the launch of a new game back in 2012, microtransactions began to take form in full retail priced games, and that game was…

Yep, Ubisoft had announced before the launch that a digital currency would be used in-game called Erudito Credits, which you can buy off of Xbox Live or PlayStation Network for as low as 25 cents, or as high as $20, those Erudito credits allowed you to jump start your multiplayer experience. Sure you could go the ethical way in order to unlock everything as you progress, but that was just easier to purchase, or, you know, legally cheating in game, but lets not dwell on the “in game cheating” thought.

After nothing much was said about Ubisoft’s microtransactions move, and since as far as my knowledge, it wasn’t incorporated in Far Cry 3, I for one though it didn’t pan out the way they had envisioned it to, and just dropped the idea. Yesterday, however, Visceral tries to justify adding microtransactions to their upcoming and widely anticipated title

And here’s what they had to say about it:

There’s a lot of players out there, especially players coming from mobile games, who are accustomed to microtransactions, They’re like, ‘I need this now, I want this now.’ They need instant gratification. So, we included that option in order to attract those players, so that if they’re 5000 Tungsten short of this upgrade, they can have it.

Honestly, most of the dev team are that way; we’re kind of old school, a little bit older, so, not only are the microtransactions completely optional, but all packs are available to purchase using in-game resources you find.

I can see why they would incorporate such a system, they want more profit out of their games, call it fighting used games, call it fighting piracy, call it whatever you want, what it is doing is hurting the actual players, that’s for sure. Think of it this way, you’re a hardcore Dead Space fan, you’re working hard in its co-op mode or multiplayer to get that upgrade you want oh so much, then, you find someone else who’s still starting, with an upgrade even better than the one you wanted! If there’s some sort of competitive multiplayer in Dead Space 3, it will be broken because of that, unless the purchases are purely cosmetic that is.

What this means for the next gen consoles however, at least in my opinion, is that games most likely will not be sold at a full $60, probably less, and will incorporate microtransactions in them, along of course with the DLCs, but that’s just my two cents about this. Let me know what you folks feel about the microtransactions system and whether you’ll feel like it’s hindering the gameplay experience or not.

CES 2013 kicks off on January 8th yet that doesn’t stop Nvidia from doing their press conference today, and sadly I didn’t know about it until a little towards the end of the press conference.

Nvidia talked first about a new software solution for the PC called GFE which was pretty interesting. What GFE does is evaluate your computer’s hardware and set the game video settings for you automatically so that you have a smooth 60FPS without fiddling with nasty video settings all the time. This is particularly useful for the gamer migrating from consoles to PCs and that has little to no experience with optimising their gameplay. You get an Xbox or a PlayStation game, you pop it in your console and you expect it to work just outside of the box, that’s not the case for the PC though, unless you have the absolute best of the best, chances are, you WILL have to fiddle with video settings in order to get a stable frame rate, GFE transports the console experience to the PC that way, it just sets everything for you, now I’m a little low on the details since I read a live blog of this part of the conference so forgive me for the lack of more details.

Next thing Nvidia talked about was Nvidia Grid, and this is basically their cloud gaming solution, didn’t read a bunch about it and didn’t catch it on the live stream, but I’m assuming it would be a more successful version of OnLive.

Onto the good stuff, Nvidia announced Tegra 4. Tegra 4 is Nvidia’s newest system on chip solution for handheld devices (phones, tablets, and whatnot -> “Whatnot” will be explained momentarily) it has a whopping 72 GPU cores along with 4 A15 ARM processors, that’s power right there! They showed off some tests and benchmarks with a tablet running Tegra 4 and other tablets, including Google’s Nexus 10 and the iPad 4, needless to say, the Tegra 4 tablet blew past everything.

Now to the REALLY good stuff. Nvidia built this up for a while in the press conference and it was damn worth it. Using the Tegra 4 as driving force, Nvidia unveiled the Nvidia Shield! 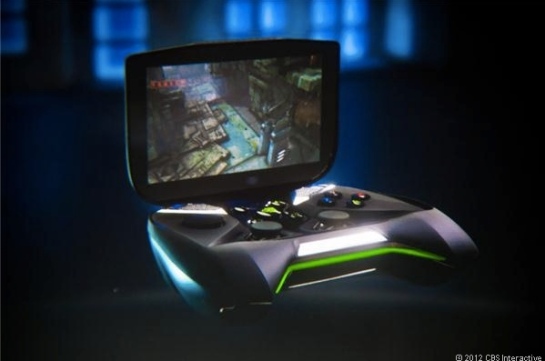 The Nvidia Shield is Nvidia’s attempt at a handheld gaming console, and a pretty interesting attempt at that. It runs pure Android, no skinning, they just didn’t mention the version though I’m guessing Jelly Bean 4.2, it is built around a Tegra 4 though no mention was made of other hardware specs, it also has a 720p retinal display mounted on it, and it’s shaped like a controller, which I think is pretty epic, I like the design a lot, reminds me of another old controller shaped gaming handheld, but that sadly didn’t make it big (Can you guess what handheld I’m talking about?).

Nvidia showcased Shield a bit, showing the software running, the Shield layer, though they said it was pure android so it must be just an application that connects to all the games and Tegra Zone, though it looks pretty clean. One of the things they showcased that was pretty amazing is how this handheld connects to TVs via HDMI, the Tegra 4 chip was able to drive a 4k resolution, and they showed that by running a few games on the handheld and on the TV simultaneously. They aslo demonstrated multiplayer via a game called Hawken which looked okay, frame rate was good, it ran smoothly.

What they showed off next though blew my mind! They connected Shield to a PC running Steam (After a while of trying to get Shield to recognise the PC, and failing, and trying again, but hey, they eventually got it!) and what they did next was pure magic, they streamed Steam onto Shield and from Shield to the TV, so basically, they eliminated the need for gaming consoles altogether. Imagine now yourself on the comfort of your couch, watching TV, when all of a sudden, you get the sudden urge of, oh, I don’t know, whacking random people with a thirty inch purple dildo, the conventional way of doing this was to get off your couch, go to your PC and start Saints Row: The Third, however, if you have a Shield nearby, you can just connect to your PC and you get all your Steam library on your Shield in the comfort of your couch, and if you connect your Shield to your TV, you can enjoy this PC gaming goodness on your TV without moving PC cases or anything! It’s absolutely beautiful! They showcased though Need for Speed Most Wanted and Assassin’s Creed III, both ran smoothly and amazingly!

No pricing has been mentioned, though if I were to guess I’d say a $300 price tag would be perfect for it hitting the sweet spot between gaming handheld and tablet, and since it runs Android, it will do what any tablet does, thus the advantage over your everyday gaming handheld.

Let me know what you folks think of this new innovation of Nvidia’s and whether you’ll be interested in purchasing one when it comes out or not!

UPDATE: Nvidia confirmed that Shield will run Android 4.2 Jelly Bean with an expected release of Q2 2013!

Error: Twitter did not respond. Please wait a few minutes and refresh this page.